It was a cold day with some sun and blue sky accompanied by winds with gusts into the 20’s. The course was Start, Indian Point, Green Buoy, Indian Point, Finish. All was going fairly smoothly until about 2/3 of the way back to Indian Point when Owl took down their jib and announced a medical emergency on the radio. Here is a report from Lynn Watson who was on Owl.

On the long beat back from the green buoy this Saturday, our crewmember Phil Rome slipped on the housetop and took a tumble into the companionway, landing on the starboard seat and banging his head quite hard. We decided to take no chances, withdrew from the race, and ran him up to the ER to be checked out. Following the usual indignities, he was pronounced ambulatory, cut loose, and we took him home. We’ll keep an eye on him for the next few days, but I’m sure that the main damage was, as usual, to his pride :) As for lessons learned, they’re pretty simple: watch your step, keep your balance, HANG ON! And in the words of the immortal Sgt. Esterhaus, “Let’s be careful out there!”.

The Coast Guard came out and escorted Owl into the the marina. After talking to Dale on the radio and determining that there was nothing they could do to help, the other three boats continued racing.

by Roland Nikles, skipper of Falcon

Four Thunderbirds tacked their way out of Boat Haven Saturday noon in an unstable SE breeze, blowing 6-8 knots from Indian Island. A yellow pyramid was set near the entrance to the harbor, and a starting line, right-end (red buoy) favored, 400 yards into the bay. Owl brought their automated five-minute count-down timer, with standard starting sequence signals.  Everyone agreed on a windward-leeward course to the green lighted buy #1, off the entrance to Kilisut Harbor, back to the leeward yellow pyramid, and then to the start-finish line.

On some days, successful upwind tactics are dominated by tide and currents. This may have been such a day.

A fair start to the race coincided with a high tide of 7.9 feet, dropping to a minus 1.2 foot tide by evening. By the time the fleet reached the weather mark (the green lighted buy off the entrance to Kilisut Harbor) there was a significant current flowing. According to NOAA, at 2:00 p.m. the current was ebbing out of the Port Townsend Canal at a speed of three knots.

Below is a map of the racecourse. Note the 10-fathom line dissecting the racecourse at a 45-degree angle, half-way to the weather mark. On the upwind leg Owl and Raven sailed towards the left corner on starboard tack, towards Rat Island forming the canal entrance to Kilisut Harbor. By the time Owl and Raven returned resolutely to the middle on port tack, they crossed Falcon and Kuma San—who favored the right side of the beat early—by 150 yards. Owl, who committed farthest towards the left corner gained most. What happened? 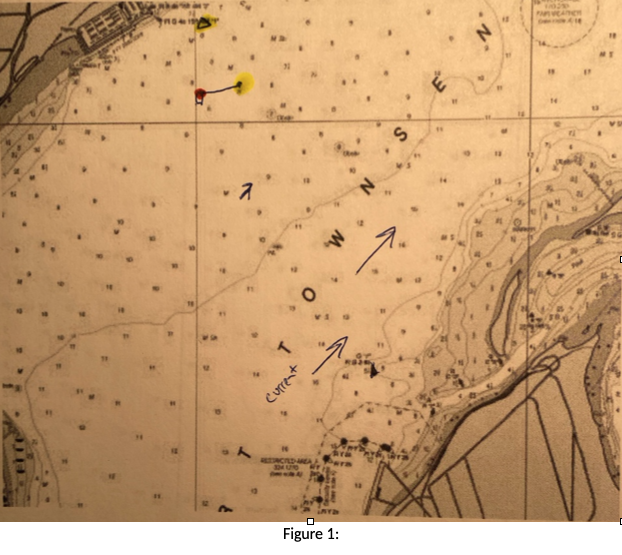 Port Townsend Bay, showing the leeward yellow pyramid on top, the start-finish line, the Green light-buy weather mark, and the presumptive current strength in the deeper channel off the weather mark

Current data is not readily available for Port Townsend Bay. There is a “toilet bowl” effect, says Jeff Brantley. He directed me to “Tidal Currents of Puget Sound” by Starpath publications, which reproduces tide charts for Port Townsend Bay from 1977 data. It is not a state-of-the-art product. Jeff pulled out the chart below as most relevant to our tide conditions on Saturday. This chart is not consistent with the NOAA data of three knots current flowing out of the Port Townsend canal. The Starpath chart “does show a very distinct flow still coming into the Bay along the Rat Island + Indian Island shore,” said Jeff. “However, its’s not exactly what we saw on the water as there was definitely outbound water at the green buoy,” he noted. 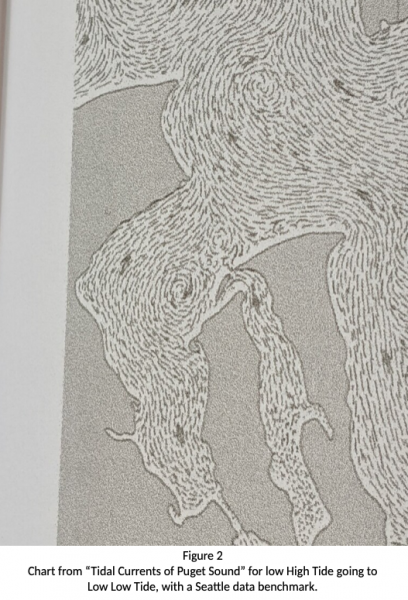 The conventional wisdom I’ve heard from local sailors is that the ebb current flows most strongly along the deeper channel marked by the 10-fathom line on the NOAA chart for Port Townsend Bay. That sounds plausible and is consistent with what we observed on the racecourse on Saturday. If, in fact, the ebbing current on Saturday flowed more strongly along the 15-fathom channel east of the 10-fathom line, past the green lighted buoy #1, what impact would this have had on the race?

It’s simple math, says Andrew York in an article in MySailing.com.au, Current Tactics: how to take advantage and avoid disadvantage.  Any boat floating along in an ebbing current in no wind will experience a current wind equal to the speed of the current, from a direction opposite of the current. If the fleet on Saturday was experiencing a 1.6 knot current wind (from the NE) in the channel, this current wind vector would need to be added to the true wind. We can do this, says York, by drawing a line of .6 or .8 inches on the bearing of the true wind, and another line of .16 inches in the direction of the current wind. The third side of this triangle will be equal to the resultant wind.

If a boat sails on starboard tack in the above 6 knot SE True Wind, from an area of no current, into an area of 1.6 knots of current as shown above in Figure 3, it will experience a header of approximately 18 degrees, and an increase in wind strength of .32 knots.  Owl and Raven, by having sailed towards this wind shift, found themselves upwind and inside of the shift in a stronger breeze—as we wish to be, and they were able to cross Falcon and Kuma San by coming back on port tack in this new Resultant Wind.

In real life, of course, everything is more uncertain and muddier! The math is not just ninth grade geometry. First, Falcon and Kuma San were not sailing in an area of no current.  Depending on the current on the right side of the course (where Falcon and Kuma San were sailing) the relative wind shift enjoyed by Owl and Raven would be reduced. [They are sailing from a smaller Current Wind Vector to an area of larger Current Wind vector as they enter the area of greater current] Similarly, the advantage enjoyed by Owl and Raven coming back on port tack in the shifted and stronger wind would be reduced by the fact that they would be sailing against the stronger current in the channel for a longer period of time….. or not, depending on exactly what the current was doing along the course sailed by Owl/Raven vs. Falcon/Kuma San.

What is incontrovertible is that things worked out for Owl and Raven sailing on starboard tack to position themselves inside on the Resultant Wind shift that occurred as they entered the area of stronger current.  They kicked our butts!  Maybe it was good looks and boat speed, but next time, in the same conditions, Falcon will be sailing towards the left side of the course to position herself on the inside of the predictable current related wind-shift.

On this Saturday, the race was over at the weather mark. The wind died on the down-wind leg, as the fleet was back on the west side of the 10-fathom line. It is noteworthy that as the wind died, Falcon continued to register 1 knot of progress on its Velocitek due to the ebbing current.  After a short while, a 10-knot breeze filled in from the West, turning the balance of the run into a beat to the yellow pyramid and a run home. But the race was in the bag at the weather mark.