Spring time is coming and with it a haul out and time to get your boat ready for the year. For many of us that means making hard choices: balancing a desire to use more environmentally friendly products against the need to protect our boat from the sea’s ability to quickly degrade it. The problem is that many of the tried and true materials work because of their toxicity – for instance Trinidad SR with its high copper content – and many of the new non-toxic products have not proven to work very well. Aluminum anodes MAY be an exception, a product that works better than traditional zinc anodes and is safer for the marine environment. From the Seattle based Clean Boating Foundation.

The Clean Boating Foundation is often asked by boaters about products they can use to reduce their environmental impact while enjoying their boat and the beautiful waters of Puget Sound.  The three major responses are: cleaning supplies, non-copper bottom paint and aluminum/magnesium anodes.  Let’s talk today about anodes.

What are anodes?  They’re sacrificial lumps of metal attached to the bottom of your boat to prevent the wasting of the good metals of your boat (hull, shaft, propeller, etc) through galvanic corrosion.  Basically, the anode corrodes before the boat does, saving you costly repairs and headaches – anodes are a good thing.  Heard of Zincs?  Zincs are anodes.  But anodes don’t necessarily have to be zinc.

In fact, even though zinc has been the choice metal in traditional marine anodes for years, there are more effective and environmentally preferable (and sometimes less expensive) choices out there.  The problem with zinc anodes, besides the fact that zinc itself is dangerous to the marine environment when it corrodes away into the water (it is actually regulated in Washington’s NPDES industrial and boatyard permits), is that they require cadmium as an activator for the galvanic protection process.  Cadmium is an extremely toxic metal, regulated at the federal level.  Bad stuff.

END_OF_DOCUMENT_TOKEN_TO_BE_REPLACED

From Treehugger , a post by Jaymi Heimbuch on a new technology that is being used to explore the oceans.

Last November, Liquid Robotics let loose four Wave Gliders in the Pacific ocean. The autonomous robots — outfitted with sensors that measure and collect information on a variety of substances, from oil spills to salinity levels to weather information — are wave-powered, using the rolling motion of the water to propel forward. It’s a slow, slow journey traveling at about 1.5 knots, but one Wave Glider, named “Papa Mau”, has completed the 9,000 nautical mile trip across the Pacific, leaving a world record for longest autonomous trip in its wake.
END_OF_DOCUMENT_TOKEN_TO_BE_REPLACED

Record-high surge levels caused hundreds, if not thousands, of boats stored at low elevations to drift away. Photo courtesy of BoatUS

This doesn’t bode well for anyone, including those of us who write a yearly check for boat insurance. From Three Sheets Northwest.

More than 65,000 recreational boats were damaged or lost as a result of Superstorm Sandy, according to BoatUS.

“We are all reeling from the huge impact this storm has had on communities and people’s lives,” BoatUS spokesperson Scott Croft said. “We’ve never seen anything like it.

“The scope of the damage to boats is unprecedented, affecting large areas from the Atlantic seaboard as far inland as the Great Lakes, with the majority of damage in New Jersey, New York and Connecticut.”

This is a picture of the wonderful summertime we have had the privilege to experience here in Cherbourg, Normandy, since the end of May. Just imagine how it will be next winter….Sylvain. 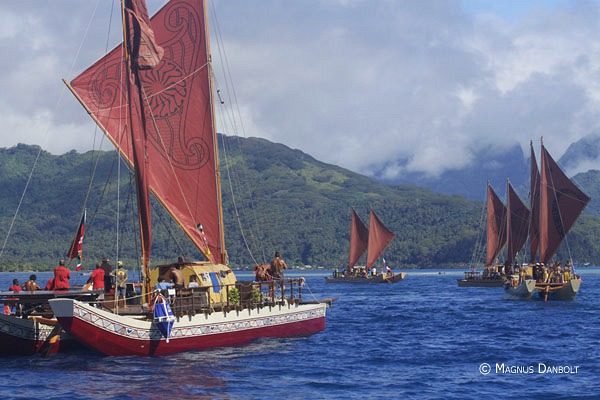 If you need for me to tell you that Magnus Danbolt’s photograph was taken in tropical waters, not in Northern California, you are perhaps not qualified to read on.

In this space I have celebrated anything and everything driving the technological future of setting forth upon the water. Now is the moment to appreciate a few unique efforts to preserve the heart and spirit of what went before, and what we hope will be a future for the waterways calling us to set forth upon the water, forever and forever.

Finishing the 2011 Transpacific Yacht Race from Los Angeles to Honolulu, more people than ever arrived in Honolulu on their high-tech raceboats talking about trash polluting the Pacific Ocean . . .

And now approaching the mainland are six Polynesian sailing canoes, vaca moanas, arriving from the far reaches of the Pacific with the message: “If we don’t pay attention to the needs of the ocean, we won’t survive as humans.”
END_OF_DOCUMENT_TOKEN_TO_BE_REPLACED

This morning Bertram Levy of the Port Townsend Moorage Tenants Union sent along the following memo that makes three specific changes to the proposed legislation that phases out copper bottom to recreational boats under 65′.

Over the past ten days since we sent out the February 11 position paper on Senate Bill 5436, House Bill 1785 that is similar in many ways to the Senate bill, has been posted on the web.   Both bills have undergone hearings and some changes.

During this time, three members of the Moorage Tenants Union have been speaking to a variety of people, including paint manufacturers, members of the Port Townsend Marine Trades Association, The Port Manager, the Commissioners, Practical Sailor magazine, and the Puget Soundkeeper Alliance.  We’re told it’s late in the game and that the bills are well along, so here are the changes we want in this legislation.

Rationale:  No justification exists to change the legal definition of recreational boat as it is found in 33 C.F.R. 6(V)§1362; or in the federal Clean Boating Act; or in Coast Guard regulations or literature.  The use of federal Vessel General Permits to suggest size limits on recreational boats is also not justified because VGP is about ballast water, deck wash, graywater and bilgewater discharges, not bottom paint.  Therefore, no size limit exists on the legal definition of a recreational boat and all should be included.

END_OF_DOCUMENT_TOKEN_TO_BE_REPLACED

Chris Wilke, Puget Soundkeeper and Executive Director, Puget Soundkeeper Alliance sent in this response to the  earlier PT Moorage Tenants Union (MTU) post. Stay tuned for a response from the MTU. Posting of Comments and entries in the Forum are encouraged. Let your voice be heard. Having a problem registering to post? Jak did some work to straighten out that function, try it again and the “Forgot my password” function is working.

I read your recent story on copper bottom paint [on the PTSA website] which was a reprint of the recent Marina Tenants Union (MTU) position paper. I have already provided MTU with comments on the paper on behalf of Puget Soundkeeper Alliance (Soundkeeper), and I had a long discussion with MTU members on this issue. I am concerned however that the tone of the article is very adversarial and one-sided, and paints recreational boaters as a victim in what is actually a multi-lateral effort to better control a significant toxic pollutant (copper).

Copper has been scientifically shown to disrupt and/or kill aquatic life (especially salmon) even in extremely low concentrations- down to levels as low a 2 parts per billion (ppb). There can also be a lot of copper in bottom paint- some paints are up to 75% copper. The copper in the paint readily leaches into the water, and if disturbed by cleaning or pressure washing, can create a dense plume in the water, which is why in-water bottom cleaning of most paint formulations is illegal in Washington state. Although Soundkeeper has clarified its position with MTU and plans to partner with them to broaden and improve the legislation, we feel a need to address some of the assertions in the article as it has now been shared with a broader audience.

END_OF_DOCUMENT_TOKEN_TO_BE_REPLACED

From a flyer sent over by the Port Townsend Yacht Club ….

New regulations seek to tighten the allowable heavy metal content in the stormwater outflows of ports and boatyard across Washington.

The Port of Port Townsend may not be able to meet these new standards resulting in huge fines and possible closures. Get educated. let your opinions be heard. Tuesday, March 22, 5:15 PM, Port Townsend Yacht Club.

More information on this issue can be found on Three Sheets Northwest here, here, here, and here.

What are your thoughts on this issue? Use the comments below to make your voice heard.