Five T-Birds and one Murrelet showed up for the inaugural race of the new frostbite series.  However, at the last minute one of the T-Birds, Owl, was not able to race.

The main story of the day was the weather; wow what a great day; bright sun, temperatures in the mid forties, and wind 5 to 10 kts from SSE.  We set a leeward mark near the entrance to Boat Haven and used the green buoy as the windward mark.

THEN, we retired for the inaugural party of the new clubhouse.   Thanks to Steve for organizing the event and preparing the great chili.  Heidi’s tasty corn bread sure went well with the chili.

This race started at noon, to make sure we could finish the party before dark.   The following races of the series will start at 1:00. 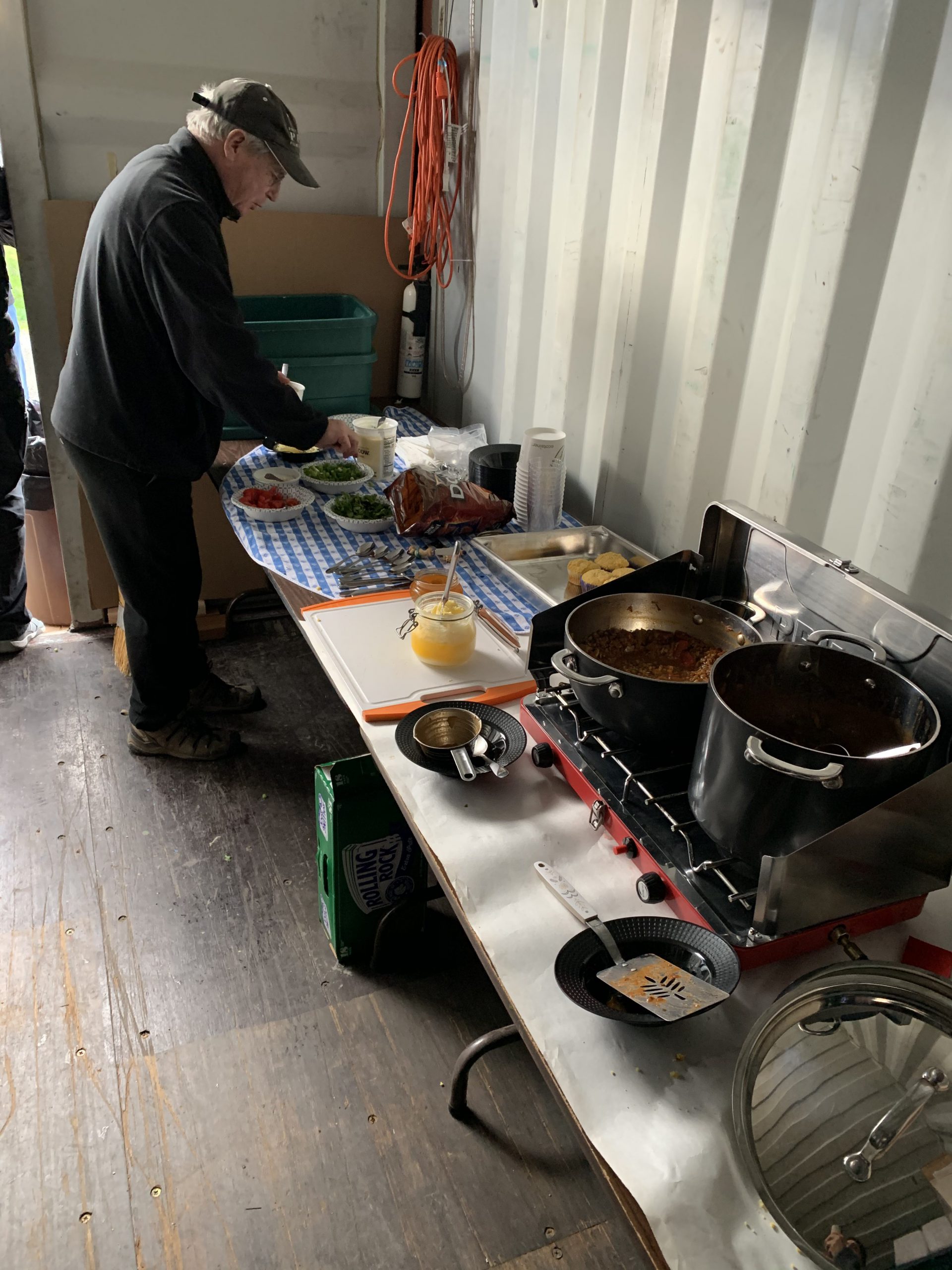 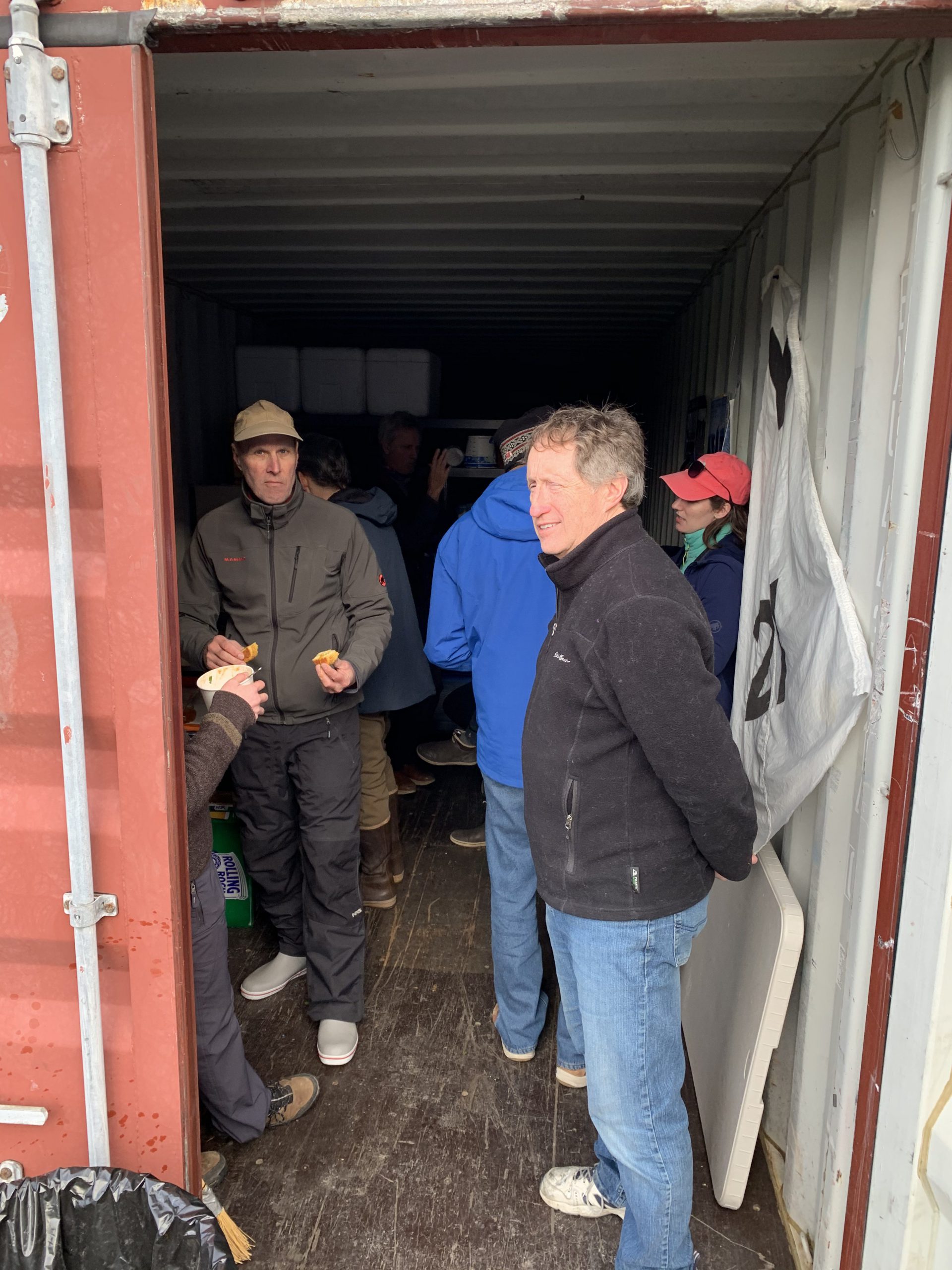 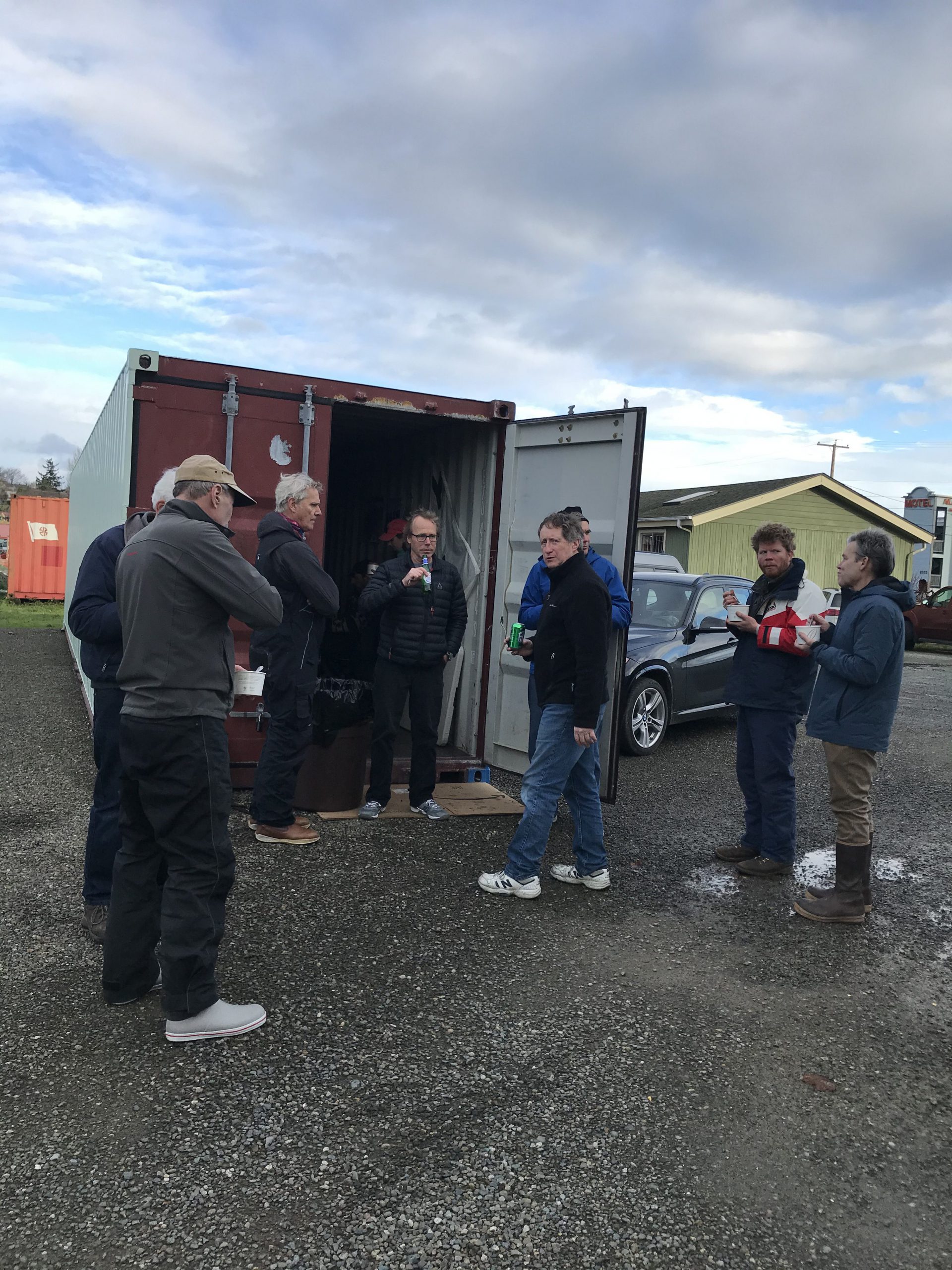 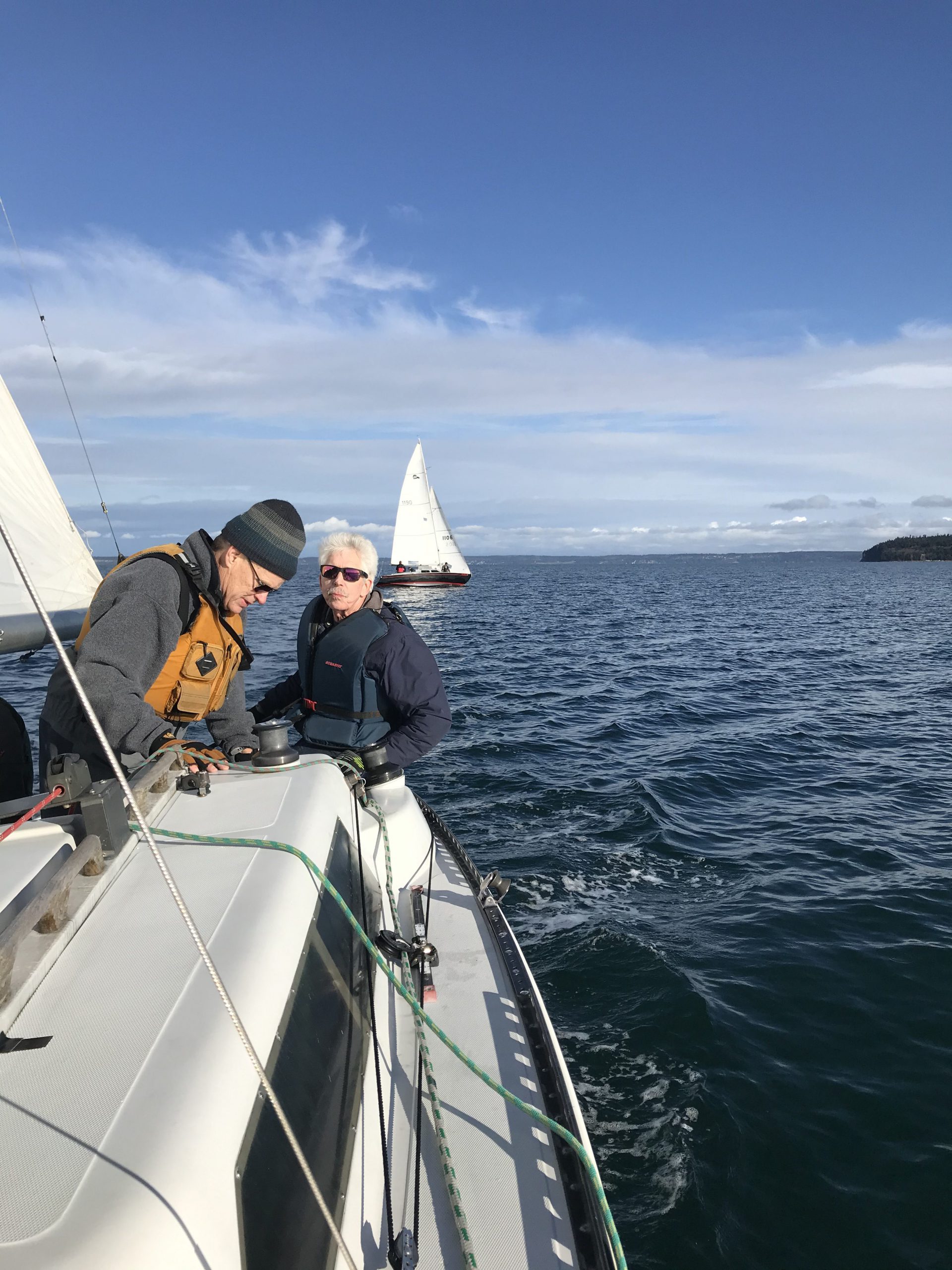 Friday evening the weather forecasts were showing Westerly winds 20 – 25 mph. with gusts over 30 mph. Although Port Townsend Bay is well known to be appropriately non-conformist with regard to regional weather forecasts, this was sufficiently alarming to call for a skippers meeting Saturday morning to review the situation. END_OF_DOCUMENT_TOKEN_TO_BE_REPLACED

Following the past two weeks where the wind conditions were at either end of un-raceable, this week’s forecast was unexciting with weak winds that were very variable in direction.

The actual wind appeared to be a little North of West and the RC left to set a temporary mark downwind of Y. On leaving the breakwater it was obvious the wind shadows to Port were the stronger so the leeward mark was set about ¾ of a mile downwind of Indian Point. With the rapidly changing wind direction it took a while of chasing to and fro to get the mark downwind of I. Eventually we settled on an average. The good thing was that the wind was building up to 3 – 4 kts during this time. END_OF_DOCUMENT_TOKEN_TO_BE_REPLACED

Too Little Wind For Second of the Whitecap Series

A dock start was set up as a CB was unavailable. A delayed start was anticipated due to the Kinetic Skulpture race passing the dock. This was immaterial as boats trying to sail to windward on any wafts that drifted by could not stem the current. After an hour, AP was replaced by N in surrender.

The possibility of scheduling make-up races is under consideration.

Too Much Wind For The First Race of the Nightcap Series

Five boats left Boat Haven for the race course on Saturday in a stiff breeze. By the time they got out to the committee boat the wind had picked up.  By the time the race was about to start the wind picked up some more.  Five boats decided not to race after all.  Thanks to Dave, the race committee, and Piper for braving the elements to get the committee boat out and anchored, and the course set, only to have to reverse the process and head back into the marina. 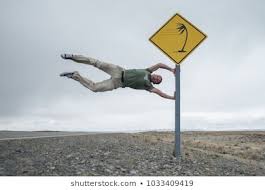 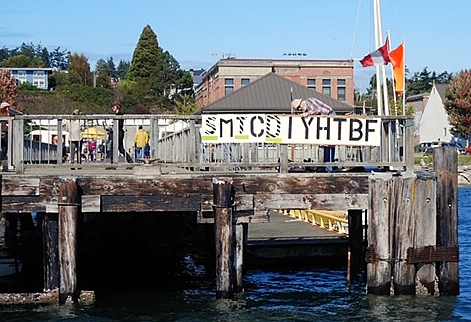 The forecast was for winds SSE about 6 mph during the afternoon and there was minimal tidal change. The RC had designed courses suitable for winds with Northerly or Southerly Components and winds forming first in the Bay or outside the Bay. Mark A was to be set so the fleet could cross the Bay after a start to the South rather than gather in front of the departing 12:30 Ferry.

Viewed from the hill on Sims Way in late morning, the bay showed little sign of wind so the RC visited the beach at Pt Hudson and found a light but building SSE wind outside the bay.  On return to the Dock (late because of difficulty parking due to the Film Festival) it was apparent the SSE wind had started to fill the bay.

Course SMTCDIYHTBF (17 nm.) was set and the fleet started with 9 kts. of wind from 150ºM. This was apparently the best wind of the day as most of the boats needed two hours to reach T at the 6 mile mark (partly due to an unpredicted strong ebb in the vicinity of B). The wind at the Dock dropped to 5 – 6 kts (same direction) during this time. The boats coming from T to C brought lighter wind with them.

It was obvious that changes to the course were needed if the fleet was to meet the time limit. Mark H and the return to Mark B were dropped from the course. While this only shortened course by 3 miles, the impact was much greater as there appeared to be little wind towards H and the strong currents in light wind at B were avoided. Two boats dropped out after the course change due to unfamiliarity with the marks and symbols.

The wind at the dock changed to 2.5 kts from 190ºM and then 3 kts from 220º as boats looped around DIYT (one boat missed D) to finish. There was more wind out in the Bay than at the dock until after the leaders had rounded T. Then they brought the dying breeze with them halfway to the finish and had to claw the rest of the way.

END_OF_DOCUMENT_TOKEN_TO_BE_REPLACED

A beautiful afternoon for sailing! 13 boats participated in 9ish knots of steady breeze.

Of the participants who were in the festival:

Chesuki and Ellie were DSQ

After a short delay to accommodate a wind shift, the 15 boats got off to a very good start. Then the wind slacked and became quite fluky, and the struggle was on to finish. Two marks were removed to shorten the course as much as possible. Sir Isaac managed to stay where there was some breeze and had a comfortable win.

Ariel of Victoria participated though she is not a schooner.

On August 31-September 1, 2019 the Port Townsend Sailing Association hosted the 2019 Thunderbird West Coast Championships. It was a well-run affair with a variety of windward-leeward courses set over seven races.  At the skippers’ meeting Saturday morning there was grumbling of “can we postpone sailing until this afternoon, when some wind is expected?” The race committee knew better.

Sixteen boats made their way out to the anticipated starting area at the center of Port Townsend Bay by 10:30 a.m., drifting about as the race committee searched the horizon for wind. Some promising ripples soon appeared near Rat Island guarding the entrance to Kilisut Harbor.  By the time the fleet reassembled a perfect sailing breeze was blowing from the SE.

Race 1.  To my eye the pin end seemed favored, and indeed the bulk of the fleet set up to start on starboard well down the line. Falcon started mid-line, off the front line, but with room to tack for clear air within a few boat-lengths off the line.  It was the right way to go. Jaunty (a Steve Scharf owned boat skippered by Matt Pistay, with Eric Dorman,  Brent Campbell, and Burgess Malarkey) nailed the start at the committee boat, tacked over to port, found better pressure on the right side of the course, and walked away with the race. Owl (skippered by Dale Dunning, with Kyle Marlantes, Lynn Watson, and sailmaker Eric Taylor) followed suit and finished second.  Raven finished third.  Kuma San (skippered by John Lynes and Jim Heumann) also followed the leaders to the right side and they had their best result of the regatta, finishing 5th.

Race 2.  Conditions remained largely unchanged from the first race. Magic Bus (skippered by Piper Dunlap, with Dan Ginther, Robert Ambrose, and Lucas Hurt) started ahead, near the committee boat, and managed to out-distance everyone to the first tack. They lead all the way to the finish. Invader (Mik