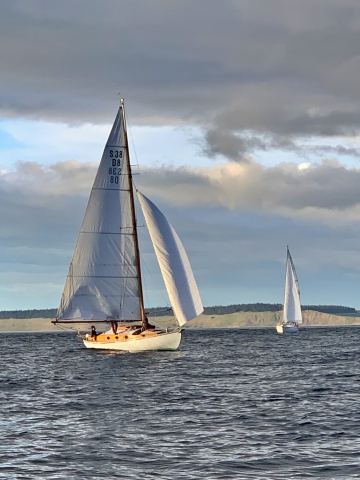 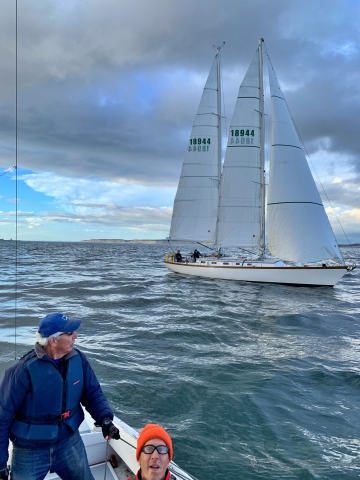 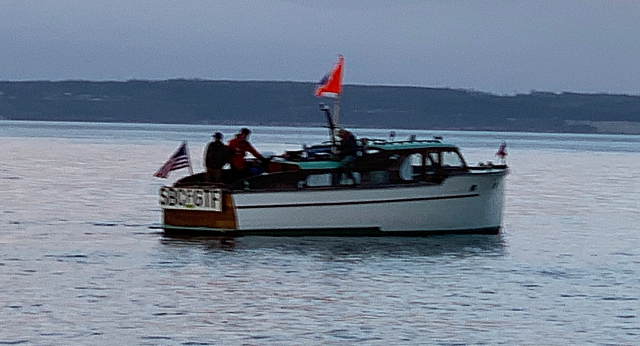 Mid afternoon the running of this race was in doubt as the Southerly wind was around 30 kts with gusts over 40. The forecast was for amelioration and after 16:00 the wind, still Southerly, was around 10 – 12 kts and the whitecaps had disappeared. Conditions were similar when the CB arrived on station. The wind was from 190°M which made GB a fair Windward/Leeward leg. Just as the RC were going to set the S/F line the wind went away.  After about 40 mins. of drifting, the wind came back from 010°, making BG a good W/L. The RC set a square line and posted course SBCFGTF This was planned to provide good W/L legs, add a couple of reaching legs for variety and, by crossing the line at about the halfway point, allowed for shortening the course.

The wind was 2 – 5 kts. from 350° at the start but immediately veered to 045°, with gusts over 8 kts. so the first leg became almost a starboard tack fetch which sped the fleet into the big wind hole and well established ebb at the buoy. Some interesting tactics were observed as boats struggled to escape this trap. When they finally rounded and broke free the wind reversed again to 135° and built to 9 kts. It was about 19:20 when the leader approached C (half the time gone, for a quarter of the distance) so the shorten course signal was raised. The Southerly was still building as the CB collected the equipment.

Information is provisional and subject to modification