Friday evening the weather forecasts were showing Westerly winds 20 – 25 mph. with gusts over 30 mph. Although Port Townsend Bay is well known to be appropriately non-conformist with regard to regional weather forecasts, this was sufficiently alarming to call for a skippers meeting Saturday morning to review the situation.

At 11:00 hrs. Saturday at the Boat Haven there was only a little, unstable, mostly Southerly, breeze. The only similarity to the forecast was the rain. The collective wisdom was that the wind was coming (already over 20 kts at Smith Island) but probably later and possibly less strongly than the scary forecast (an update Saturday morning moved the forecast back over two hours). It was decided to set a course between fixed marks and run a race and possibly two before the winds became dangerous.

When the CB left the breakwater the very light, patchy, wind was found to be from about SW. This meant that none of the fixed marks came close to aligning W/L. A temporary Windward mark was set at the far edge of a wind shadow about ½ mile south of the Boat Haven, with the intent of using C or I as the Leeward mark, depending on where the wind settled.

Halfway to the leeward marks it appeared C was the correct choice and the pin was set. While maneuvering to anchor the CB it was realized that I was now a better choice for the leeward mark. The pin was recovered but before its anchor was raised the wind moved back.

The CB waited a while to make sure the shift endured then released the Pin and anchored. Before the RC was ready for the start the wind backed again. The CB raised anchor, collected the Pin and reset the Pin with I as the leeward mark. Whereupon, before the CB could anchor the wind veered to NW and strengthened. Course SITF was signaled, the Pin happened to be in the right place, the boat anchored and the sequence started. After the Class Flag was raised it was noticed that the wind was now blowing along the start line instead of across it. The Postponement Flag was raised again.

As the Pin, I & W were still in fair alignment with each other and, surprisingly, the wind, the CB moved to square the line, the RC set course SWIF2 and, although the wind was still light and shifty, got a race started. An hour and a half late, the RC appreciates everyone’s patience.

The wind picked up a little during the first lap but boats on the wind were observed making sudden heading changes of 30°. During the second lap the wind veered to NW and began to build solidly. The leg to the finish was a fast reach.

This was obviously the forecast blow moving in fast, when the CB pulled anchor it was already 20 kts.The screenshot below shows Saturday’s wind history from the Paper Mill weather station. The variability of wind direction in the early afternoon explains the difficulty setting a course. The temporary mark W was set a bit before 12:30

Once again this week the virtual PHRF fleet was represented by Sir Isaac. Her participation is much appreciated.

This was the last race of the last Series of 2019. The Race Committee congratulates all those who were victorious, even if it was only a personal victory. Commiserations to those who fell short of their expectations. Thanks to all for your Corinthian Spirit. If you had fun and learned something then we are all winners. 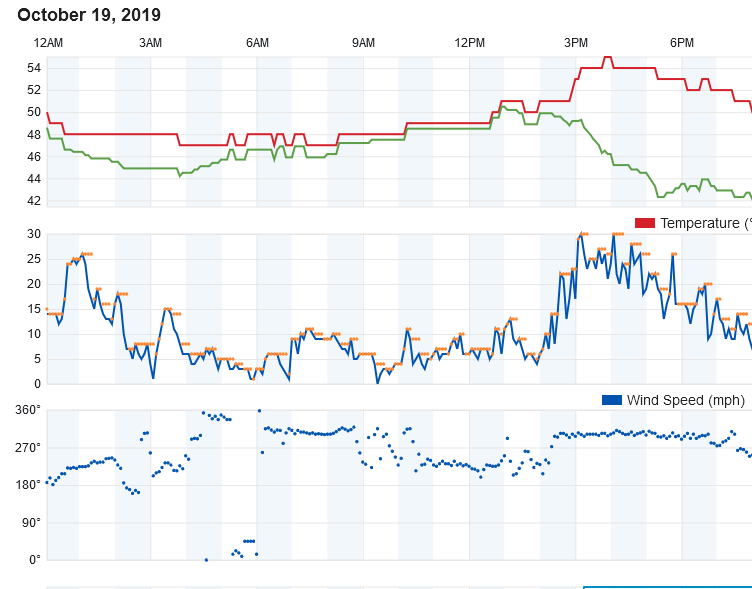