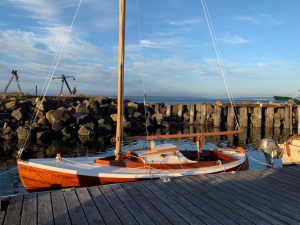 Port Townsend, Washington, is proud of its wooden boat tradition. At the twilight of the commercial sailing era it was a bustling seaport, strategically located at the entrance to Puget Sound. Shipyards, boatwrights, foundries, shipping agents, a majestic customs house on the hill, and a busy waterfront have left their mark. Today Port Townsend identifies as a Victorian sea-port and arts community. The wooden boat tradition has shifted from the utilitarian to the aesthetic. 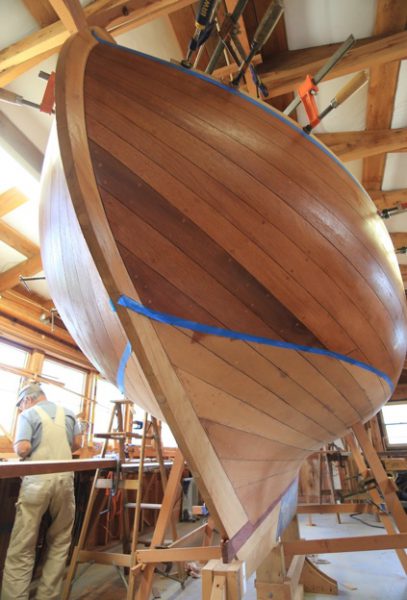 On June 20, 2019, at 4:00 p.m., four or five dozen people gathered at the Point Hudson boat yard to witness the launch of Bertram Levy’s new 19’ spittsgatter, a small aesthetic wonder. “Spittsgatter” is a Danish word meaning “double-ender.” The varnish glistened on the Honduras mahogany planking and Douglas fir spars in the afternoon light. There was a reverential murmur in the crowd, there to witness the launch of a work of art. The work of a decade. The result of perhaps 9,000 hours of loving labor: $783,000 at shop rates. If we account for the value added by friends, consultants, and the cost of materials, the crowd was witnessing the launch of a $1 million dollar 19’ yacht.  “I name thee Murrelet,” said Bobbie Butler, Bertram’s loyal spouse and muse, smashing a bottle of champagne on the brass strip protecting the bow.

The writer E.B. White (“Charlotte’s Web”, The New Yorker, Strunk & White’s “The Elements of Style”) commissioned a version of this boat in 1955 from the Danish naval architect K. Aage Nielsen (1894-1984). Nielsen moved to the U.S. in his twenties to become a major designer for the famed John G. Alden Company and Sparkman & Stephens, Inc. After World War II, he struck out on his own, designing and overseeing the construction of custom yachts to exacting standards for customers who could pay. E.B. White, a perfectionist in crafting sentences and paragraphs, was drawn to Aage Nielsen and the perfection of his spittsgatter.  “When I think of Aage,” said Olin Stephens in the introduction to Maynard Bray and Tom Jackson’s biography/portfolio of Nielsen (Worthy of the Sea (2006)), “the one word that describes him completely is integrity. He … took no shortcuts. His drawings, (were) complete and attractive.”

Like E.B. White, who ran across a description of Nielsen’s spittsgatter in the November 1948 issue of The Rudder, Bertram Levy could not resist Nielsens’s no-shortcuts aesthetic. In 2009 Levy was exploring designs for a new boat-building project. He wanted to down-size. He wanted a boat he could trailer for possible solo trips to Barkley Sound, or to the Chesapeake. A boat he could work on in his shop. A boat to winter at home. A day sailor for Port Townsend Bay. A boat to race around the buoys on occasion. A boat that would be beautiful. A boat worthy of the Honduras mahogany he had stored for planking, the locust for framing, the Oroford cedar, the fir for the spars.  He spoke with Peter Christiansen, “a great Danish boat builder on Lopez Island,” about possible boat designs. He looked at the designs of Emmanuel Campos and liked his Lehg II made famous by Vito Dumas’ single-handed circumnavigation of the Southern Ocean in the depths of World War II, but he did not care for Campos’s small boats. Frank Schattauer, the Seattle sailmaker, suggested Bertram look at Bray and Jackson’s Worthy of the Sea—a project Schattauer helped support—and there on page 50 was a picture of E.B. White’s Fern together with basic dimensions, sail area, displacement, ballast, and sail area/displacement ratio. There was one problem: no design.

Nielsen’s original plans, papers and related files are preserved at the Peabody Essex Museum in Boston, but in accord with Nielsen’s desires, a condition of the donation was that no further boats should be built from his plans. Aage Nielsen, it turned out, was perfectionist to a fault: he had the conceit that if he was not there to supervise construction, the result would not be “worthy of the sea,” in Bray and Jackson’s phrase.  By the time he died, say Bray and Jackson, Nielsen believed that boatbuilding had lost its heart and that the skills needed to build his exquisite designs were rapidly becoming a thing of the past. But then Nielsen had never met Bertram Levy, or the Port Townsend wooden boat scene. The death of wooden boat-building to exacting standards has been exaggerated. The aesthetic of expressing beauty in wooden boats remains very much alive in Port Townsend.

Bertram Levy found a graphic depiction of Nielsen’s design lines in Wooden Boat magazine along with a construction and one photograph of a completed boat in Worthy of the Sea. Peter Christiansen re-drew the lines stretched from 18’3” to 19’ on a 3×5 index card. Bertram then lofted the design in his shop. This entails tracing full size drawings on plywood in three views. All three views must line up with 1/16” tolerance. From the lofting views, Levy made full size patterns and cut the planking. Peter Christiansen visited him in his shop and showed Levy how to make the bevels for building the foundation and helped set up the back-bone for this new spittsgatter. From there, Levy steamed the frame members.  “This was about 2011,” says Levy. In 2012 he set up the frame and backbone for the boat.  In 2013 -14 he completed the planking using tight seam construction. This means individual planks are set next to each other without caulking. It requires extremely accurate board dimensions to be successful.

Bertram Levy built the mast, the boom, the wood patterns sufficient for Port Townsend foundry to sandcast the bronze fittings on the boat. Barry Stephens provided a jig to bend the bronze to be used in creating all the blocks. Ed Louchard made the sheaves. When all was ready, Randy Cherrier helped move the boat from the shop and onto a trailer procured from Tuff (Ferndale, WA).

Although friends may lend support and encouragement, building a boat single-handed is a marathon effort, like sailing a boat around the world single-handed. Twice. Bertram Levy is also a musician. While building this boat, he spent up to six months a year in Argentina studying the Bandoneon, and while in Port Townsend he practiced his music in the mornings and worked on the boat for six hours in the afternoon. It requires more focus, energy, skill, and endurance than most of us can muster in the eighth decade of life. Bertram Levy has graced our port with another beautiful work of art in wood construction.

Aage Nielsen would have gladly sold a set of plans for Murrelet to Bertram Levy had he known. 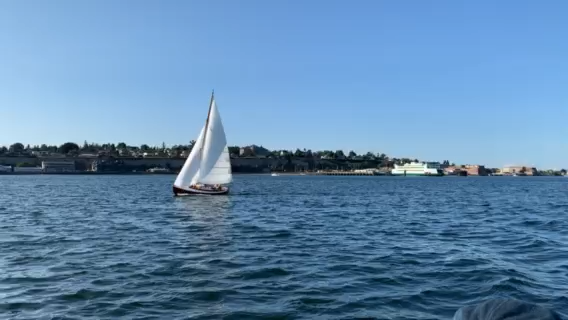 No matter how beautiful, boats are not museum pieces, so the ultimate question is “how does she sail?” Nielsen designed his boat for a 15.43 sail area to displacement ratio with a sail plan of 199 square feet. In order to accommodate the oft light winds in Port Townsend Bay, Jim Franken of Tim Nolan Marine Design provided a more performance-oriented sail area to displacement ratio of 18.0. “From that reference point, Kit Africa designed the center of effort and sail area,” said Bertram.  The result was a mast two feet higher than Nielsen’s design, and a sail plan of 239 square feet, twenty percent larger than Nielsen’s original design. Frank Schattauer designed the mainsail with full battens and a large roach and so there was much anticipation of how the boat would stand up to its canvass. Like a dream is the answer.

I was honored to accompany Bertram on Murrelet’s maiden sail. A warm 7-9 knot breeze blew from the NW and the boat comfortably stiffened to a close-hauled course moving through the water at five knots past the City Front. The helm was balanced, pulling to weather just the right amount in the gusts. The clew and leach of the small jib are even with the mast and the sail sheets inside the shrouds to traveler cars on the cabin top. From there the jib-sheets can be led directly to the halyard winches on the cabin top, or to small brass snubbing winches on the cockpit coaming.  The small (69 sq. ft) jib makes tacking the boat very easy. 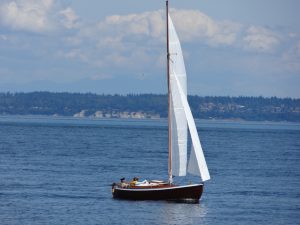 The large mainsail easily overpowers the rudder. Bearing off under main alone, as in maneuvering out of a slip, can be tricky. Bertram has added a yuloh sculling oar, which easily drives the boat at 2+ knots in still air and flat water. It is not quite enough to maneuver the boat in a breeze in tight quarters in the marina.  For those occasions, Bertram has added a Torquee 3 hp electric motor, complete with solar panels to charge the battery.

Murrelet is a worthy addition to the sea and to Port Townsend’s collection of wooden boats.

Watch this 14 minute visit to Bertram’s shop at OffCenterHarbor.com.

About the Author: Jim Heumann