Sugar Flanagan reports in on the PT High School Sailing Team’s season so far. We invite all our readers to join with the Port Townsend Sailing Association and many of our members to support this great program. Donations are accepted through the Northwest Maritime Center.

It’s time for an update on the PT High School Sailing team’s 2014 season. So far we have had a total of five fleet race regattas. Three of our regattas have been in light challenging conditions  and two had a reasonable breeze. Port Townsend has won three of these (sailed in V-15’s) and placed second and third in the other two (sailed in FJ’s) . Eliza Dawson and McKenzie Ginther have won A division in all 5 regatta with an impressive amount of bullets. This season we have added two used FJ’s to our fleet, so we can get more practice sailing in FJ’s.

The last regatta we attended, the Island Cup Regatta, was held on Lopez Island for the first time, since Lopez has just started a High School Sailing team! It was Spring Break so we took most of the team up on ALCYONE with Eliza Dawson joining in the Islands. The regatta was held in Fisherman Bay and was our first time in there with the ALCYONE ( we draw ten feet). We had a great sail up with the team on Wednesday and the ALCYONE sailed around outside of Fisherman Bay while I went in with the dinghy to sound the entrance. Thursday it blew and we tucked in a reef and went for a sail from Blind Bay down to American Camp and then rowed ashore for an explore. We entered the harbor early Friday morning on a highish tide, and were around to help rig boats and participate in the Friday afternoon practice. After a great weekend of sailing, we left early Monday morning. By the time we scoped out the harbor, sneaked in, scoped out the exit on a lower tide and snuck out our lead line was totally worn out – but it was a successful regatta. 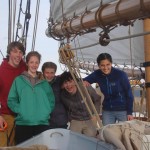 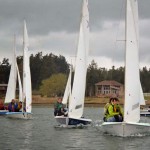 Chloe and Sean leading the fleet. 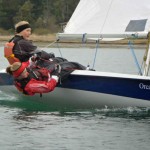 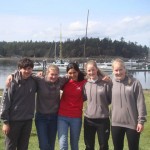 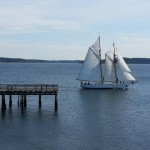 ALCYONE returns to PT from the Island Cup Regatta.

There were twenty-nine teams (boats) racing at a time with multiple teams from Portland, Seattle, Bellingham and the  San Juan’s with the rest coming from our peninsula. Conditions Saturday were force two at the start and force four when we stopped in the early evening (1800hrs). Sunday started light then got lighter, only four races gotten off on Sunday.  We sailed one and a half teams.  Anda Yoshina and Jonathan Parent formed a half team sailing for Chimacum.It was Anda’s first time skippering at a regatta and Jonathan’s first time crewing. They were right in the mix and had a great time. Eliza Dawson and McKenzie Ginther and sailed A fleet and Chloe Dawson and Sean Westlund sailed B Fleet for Port Townsend. PT had five first place finishes, three second place finishes and two thirds out of twenty races. Only two races with double number finishes. PT finished first with Sehome (Bellingham) in second and Lincoln (Portland) in third.

Our next regatta on the twenty sixth and seventh of April will be in Anacortes and is our fleet race district regatta with the winner going to San Diego for the Nationals held on May tenth and eleventh. Keep your fingers crossed for us, the regatta will be sailed in FJ’s which is more of a challenge; but the team is practicing hard and once again is a threat to be reckoned with.

About the Author: JK